The Rosenberg Self Esteem Scale (“ROSENBURG-SES”) is an instrument designed to measure individual self esteem. This instrument is the most widely used self-report measure of its kind, developed in the 1960s by Morris Rosenberg. The instrument contains 10 statements that pertain to self-worth and self-acceptance, with a four-point response scale ranging from “strongly agree” to "strongly disagree.”

The Rosenberg SES presented high ratings in reliability areas; internal consistency was 0.77; and minimum Coefficient of Reproducibility was at least 0.90 (M. Rosenberg, 1965, and personal communication, April 22, 1987).  A varied selection of independent studies each using such samples as – parents, men over 60, high school students, and civil servants – showed alpha coefficients ranging from 0.72 to 0.87 (all fairly high).  Test-retest reliability for the 2-week interval was calculated at 0.85, the 7-month interval was calculated at 0.63 (Silber & Tippett, 1965,  Shorkey & Whiteman, 1978).

Below is a list of statements dealing with your general feelings about yourself. Complete these questions based upon your feelings  in the past 6 weeks. 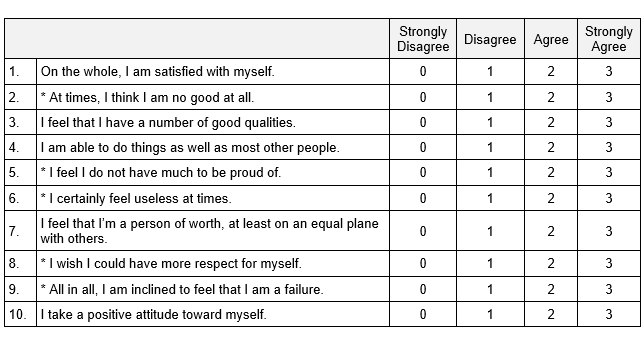 Strongly agree = 3 ; Agree = 2 ; Disagree = 1 ; Strongly disagree = 0. Items with an asterisk are reverse scored. To calculate the total self esteem score, sum the scores for the 10 items. The higher the score, the higher the self-esteem.

Greenspace has provided the following scoring ranges for levels of self-esteem.

References with further characteristics of the scale: